Posted at 20:22h in news, TUDOR USCC by john Kuypers

Now the 12 hours of Sebring may be started: At the official test on the Sebring International Speedway Christian Engelhart and Rolf Ineichen drove numerous kilometres. Now the team is prepared at its best for the prestigious endurance race in the middle of September. The test in Sebring took a successful course as well for the sister car of the team Dempsey Racing / Konrad Motorsport.

”We can say that we are satisfied with all the things we have learned”, reports team manager Franz Konrad after the two days of testing in Sebring. “Christian and Rolf have worked out a setup, which should give us a good basis for the 12 hours race.” Because of its characteristics the circuit in Sebring is renowned as a real challenge for the drivers. “The track is quite a mogul field”, Christian Engelhart describes one of the special features of the circuit embedded in an old airfield. 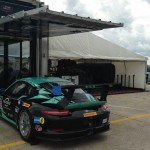 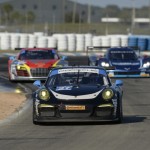 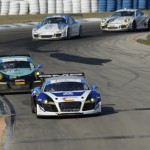 A final decision about the drivers competing in the endurance classic in Sebring isn’t made yet. “The regulations of the IMSA make it no an easy matter to decide who is going to take the seats behind the steering wheels of our cars”, says Franz Konrad. “However, we will try to announce our driver line-up as soon as possible.” Nevertheless, the cockpit of the second Porsche 911 GT America will be shared by Hollywood-Star Patrick Dempsey, Andrew Davis and Joe Foster again.

The 12 hours race of Sebring is already the second round of the new Tudor USCC and takes place from March 12th to 15th. The venue of the event is the Sebring International Raceway, which is built on an old airfield in Florida. The first endurance race on the quite demanding circuit, which is full tradition, took place already in the year 1952.